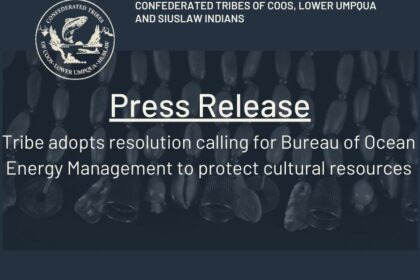 Confederated Tribes of the Coos, Lower Umpqua and Siuslaw Indians

Last week, the Confederated Tribes of the Coos, Lower Umpqua and Siuslaw Indians (“Tribe”) submitted comments to the federal Bureau of Ocean Energy Management (“BOEM”) expressing significant concern about proposed development of offshore wind energy off the Oregon Coast in areas designated by the Bureau of Ocean Energy Management as the Coos Bay and Florence Call Areas.

“The tribe supports any green economic development project that follows the law and does not harm our environment or tribal cultural resources. Given this, the Tribal Council takes the decision to submit these comments seriously,” said Tribal Council Chair Brad Kneaper. “These comments follow the passage of a Tribal Council resolution earlier this month that calls upon the Bureau of Ocean Energy Management to engage in meaningful government-to government consultation with the tribe and to take action to ensure that offshore wind energy development in any area of interest to the tribe avoids or mitigates impacts to tribal cultural resources to the satisfaction of the tribe.”

In multiple communications with the Bureau of Ocean Energy Management, the tribe raised a number of concerns to BOEM about wind energy development. These comments include a request that important, cultural viewsheds be excluded from the Call Areas, that wind development, including necessary infrastructure such as transmission lines, not impact areas designated as a Traditional Cultural Property (Q’alya ta Kukwis shichdii me)(located in Coos Bay comprised of the estuary features and adjacent shoreline resources), that development not occur in areas containing cultural features located on submerged landforms, and that wind development avoid areas critical to resident and migratory species, including important areas for fishing.

The tribe has called the coast our home since Time Immemorial. The archaeological record of Oregon tribal nations spans more than 11,000 years. Our religious beliefs, traditional practices, fishing, first foods and relations are interconnected and influenced by all that is encompassed in the greater Ocean. This claim honors our obligations to uphold our sovereignty, perpetuate our unique cultural identity, and promote the intergenerational transference of knowledge. The tribe consistently advocates that any projects, on land or offshore, avoid impacts to sites of traditional and religious significance to the tribe, including the TCP features and other sites, such as viewsheds, resources, and submerged landforms that possess associations with the cultural practices, traditions, beliefs, lifeways, art, crafts, or social institutions of our living community.

“The tribe initially asks the Bureau of Ocean Energy Management to exclude areas of significant cultural importance to the tribe in a January letter, but BOEM included these areas anyway without engaging in government-to-government consultation with the tribe,” said Chair Kneaper. “Our comments and resolution reiterate that expectation that the Bureau of Ocean Energy Management uphold its trust obligation to protect tribal resources and exclude those areas. If BOEM does not, the tribe will need to look at all opportunities to ensure that wind energy development avoid impacts to resources that are important to the tribe.”

“The tribe remains open to working with the the Bureau of Ocean Energy Management to resolve the issues raised in our comments,” said Chair Kneaper.

What you can read next 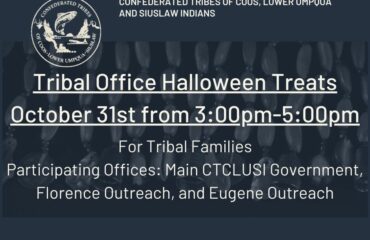 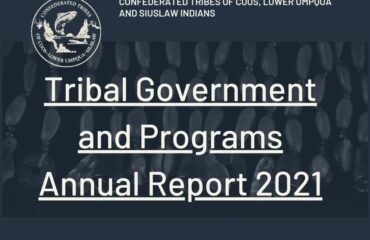 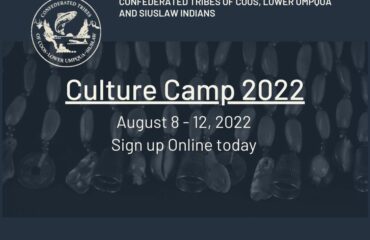