Exercise of the Tribes’ sovereignty providing for resolution of conflicts within tribal court.

Peacegiving will provide a voluntary dispute resolution alternative, grounded in the tribal traditions of peace and healing.

Benefits and Goals of Tribal Court

Benefits: Exercise of the Tribes’ sovereignty providing for resolution of conflicts within the tribal court.

Goals: Tribal court will be user friendly; various forms are available from the court clerk and on-line. Alternative forms of resolution are planned; costs will not be prohibitive.

Peacegiving will provide a voluntary dispute resolution alternative, grounded in the tribal traditions of peace and healing.

Purpose
The Tribal Council of the Confederated Tribes of Coos, Lower Umpqua, and Siuslaw Indians created Peacegiving on November 13, 2005, by Tribal Council Resolution 05-111. The purpose of Peacegiving is to protect the health and welfare of Tribal members by utilizing Tribal customs and traditions to resolve conflicts and to assist Tribal youth in need of services. It is grounded in Tribal traditions of peace and healing.

Peacegiving is a division of the Tribal Court and is subject to the supervision and control of the Chief Judge. Peacegiving is facilitated by Peacegivers – who are Tribal members who have the respect of the Tribal community and a reputation for honesty, integrity, humanity and a demonstrated practice for resolving local problems by means that honor Tribal values of peace and healing.

Objective
Peacegiving is a significant alternative to the criminal justice system and serves as a model to other communities and Tribal Courts for restorative justice. Any type of dispute can be referred to Peacegiving by using the “Notice of Dispute and Request for Transfer of Dispute to Peacegiving” form.

Philosophy and Cost Benefit
Statistically, the numbers are small, however, the ripple effect on the life of the youth, their family and their Tribal community are huge. Success stories include Tribal youths who are now college graduates and gainfully employed, been awarded scholarships and others who have turned their lives around so they do not enter the State Court System, which would have “followed” them through life.

Peacegiving is an investment in the members of the Tribes by providing for a cultural response to conflict.

Peacegiving works to benefit all parties. 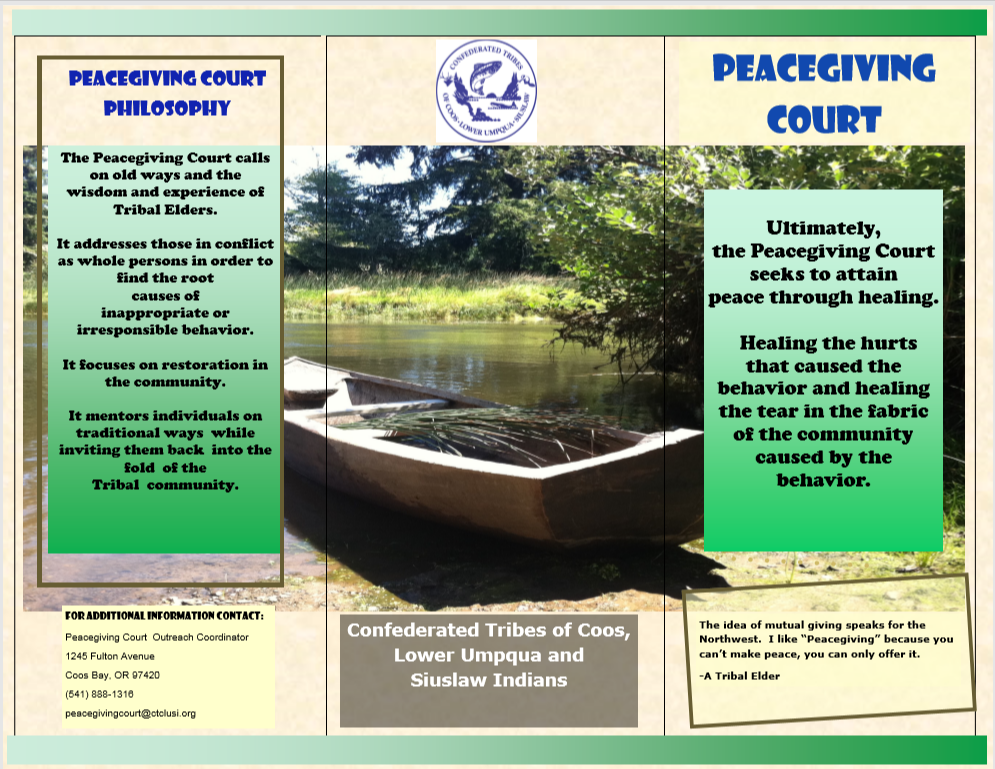 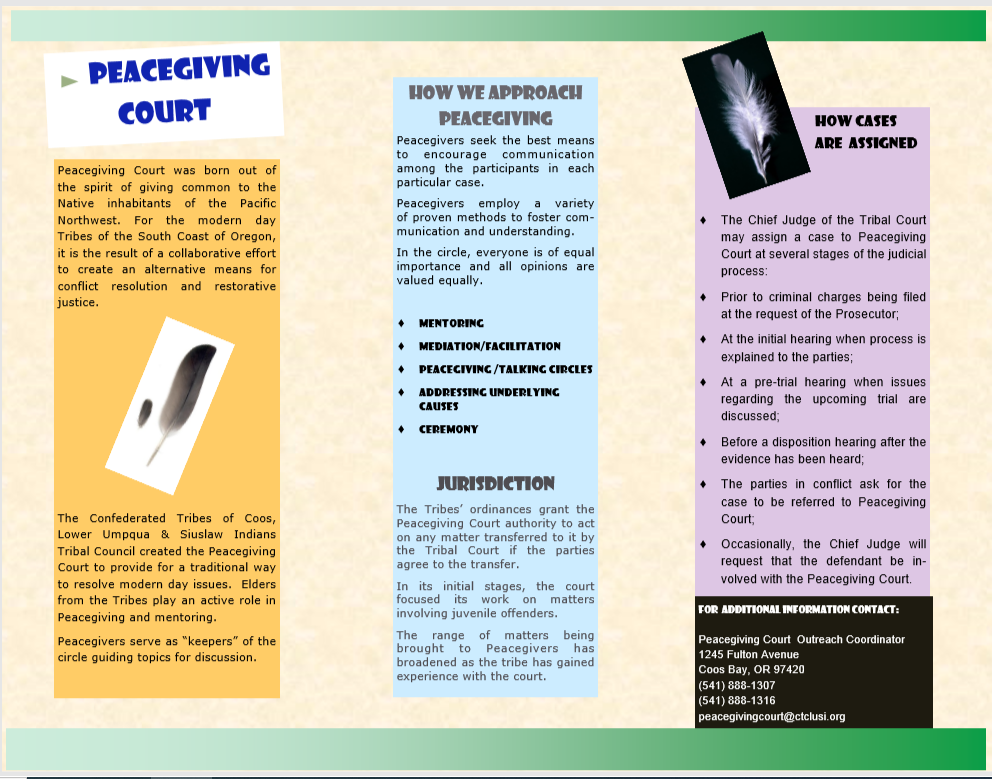 The CTCLUSI Wellness Court serves Tribal Members who are involved in legal or administrative disciplinary proceedings who may also struggle with substance abuse. Such persons may access the CTCLUSI Wellness Court by several difference avenues, including but not limited to self-referral, CTCLUSI Police citation, CTCLUSI Family Services, family service departments of other jurisdictions (state and tribal), on the CTCLUSI Tribe’s Motion or Petition, referral from the CTCLUSI Education and Housing Departments, collaboration with state court systems, and referral from state and/or tribal probation or community corrections departments.

Please bring your questions to the attention of Jennifer Stephens, the Wellness Court Case manager. She may be reached at the Tribal Court Office in Coos Bay in person, by phone at 541-888-1307 or Cell 541-808-8425, or by email at jstephens@ctclusi.org.

Any CTLCUSI Tribal Member, family member of a Tribal Member, or member of any other federally recognized Indian tribe may be eligible for participation in the CTCLUSI Wellness Court. If you know someone who is struggling with substance and having legal or administrative problems, you may use the form at the top of this webpage to refer them for consideration in this program.

COURT LOCATION: Tribal Court and Peacegiving is held at the Tribal Government Building of The Confederated Tribes of Coos, Lower Umpqua and Suislaw Indians, located at 1245 Fulton Avenue., Coos Bay, OR. Confirmation of court schedules can be made by speaking with the court clerk at 541-888-1306.
The court clerk’s office is located at 1245 Fulton Avenue, Coos Bay, OR. Office hours are posted. Call 541-888-9577 to determine staff availability.