The Tribe is working diligently to create resources, tools, and opportunities to learn the indigenous languages; Miluk, Hanis, and Sha’yuushtl’a uhl Quuiich.

Welcome to the Language Page!

The language videos and lessons found within this page are to support the use of ‘Language and Culture in the Home’. Within each category you will find short videos with Tribal illustrations and sound for words and phrases that cover a particular domain, such as ‘bedroom’, ‘bathroom’, and next month ‘kitchen and cooking’. Each month check back to see a new domain added! We hope you enjoy labeling your house, creating simple recipes, being able to ask simple questions, describe everyday events, etc. As we grow our domains we look forward to hearing from language learners on any needs and ideas! kʼele, luuwii, iisha, hiisa.

Each month check back to see a new domain added! We hope you enjoy labeling your house, creating simple recipes, being able to ask simple questions, describe everyday events, etc. As we grow our domains we look forward to hearing from language learners on any needs and ideas! kʼele, luuwii, iisha, hiisa.

The Language Committee, newly established by the Tribal Council meets from 5:00-7:00pm on the 4th Friday of each month (with instances of different meeting dates in the cases of Holidays coinciding. At their second meeting held on September 25th, the (8) sworn in members of the Committee nominated and voted in Chairwoman Alycia Cossey, Vice-chair Jamie Beisanz and Secretary Rachael Schaefer to their Committee roles. They have been working hard at establishing Committee bylaws and on September 30th the Tribal Council approved a resolution to establish the committee as a nine (9) member Committee. With that said, there is a vacancy for position #9. Position #9 will be posted on Oct 19th for 28 days on the Tribes website at www.ctclusi.org and in the November newsletter with a deadline of November 16 or until filled.

Tribal Council looks to Appoint one more member to the Language Committee!

Click tabs below to expand and watch Tribal Language Videos.

This is a sample text. You can click on it to edit it inline or open the element options to access additional options for this element.

Hairbun and I tied up my hair - smex and xhaluuxhalau tlo'nohamis

Im drying myself off - nch'liit ntet

What are you wearing? toq asuutanx

Disclaimer: If you are joining the language classes late in the 10-week series - it's highly recommended that you watch the previous class recordings to more easily follow along. Scroll down for zoom meeting links. 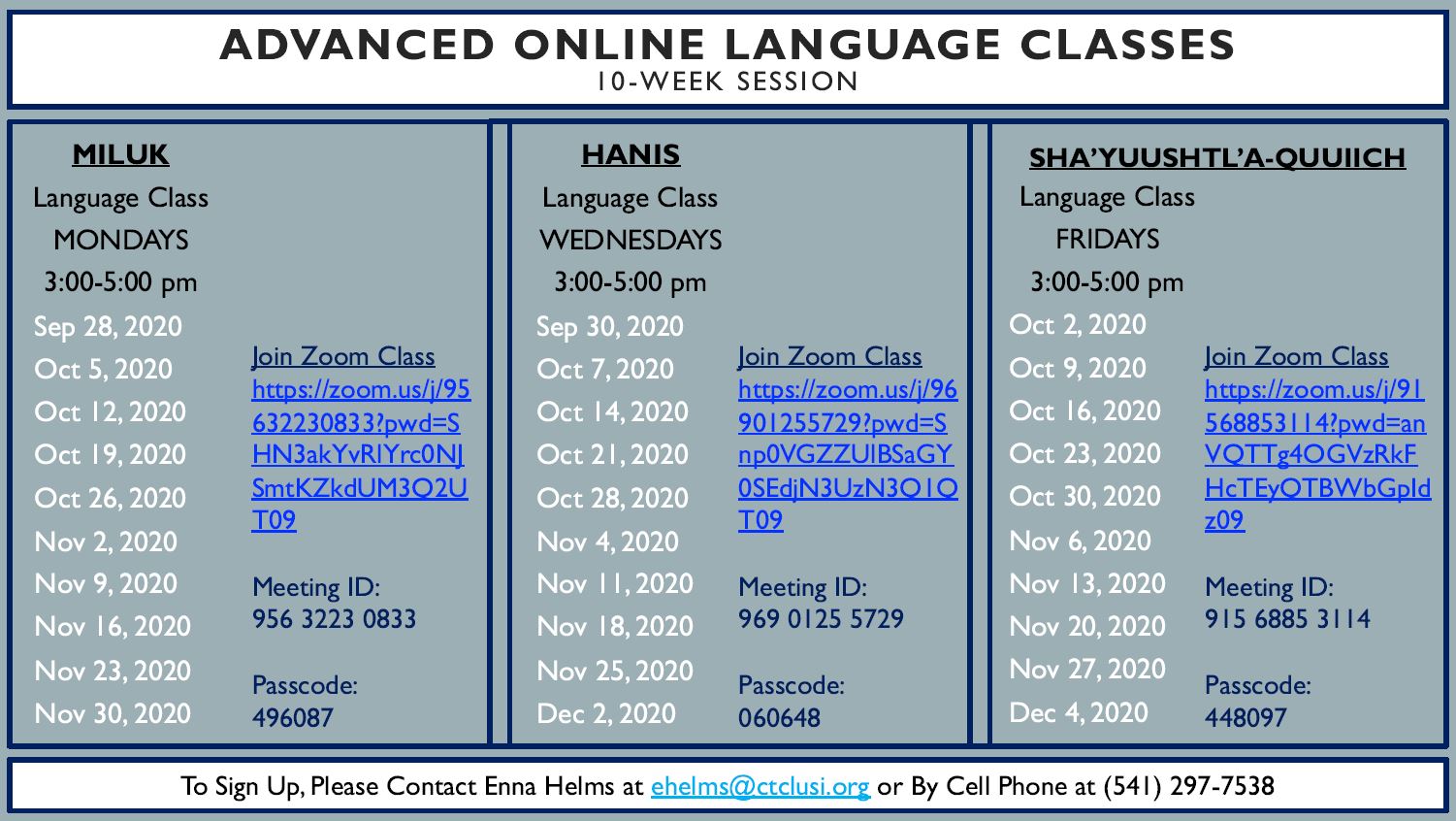 Contributed by Enna Helms, Linguist Associate and published in The Voice of CLUSI May 2020 Edition
We would like to announce the new formation of a Language Committee and the Tribal Council is actively looking to appoint seven (7) members! The committee’s general focus will be on advocating for the revitalization of our indigenous languages: Miluk, Hanis, Siuslaw (including the southern dialect of Siuslaw spoken by the Quuiich people), and Chinook Jargon.
We would like to acknowledge the work around language that has brought us to this point with some brief knowledge of our languages. Hanis and Miluk are closely related languages spoken on and around Coos Bay. Hanis speaking villages were all along the upper Bay down to Empire, as well as Tenmile Lake. Miluk speaking villages began at Second Creek between Empire and Charleston, and continued down to South Slough and Cape Arago. Lower bay Miluks also had seasonal fishing camps on the South Fork of Coos River (the actual Millicoma River). Another band of people, the Lower Coquille that lived at the mouth of the Coquille River also spoke a dialect of Miluk. The Quuiich (Lower Umpqua) people lived from north Tenmile Lake north to Siltcoos River, along the lower Umpqua and Smith Rivers. Siuslaw people lived along the Siuslaw River and Lake Creek, and claimed the coast line from Siltcoos River north to Tenmile Creek/Stonefield Beach. Siuslaw and Quuiich are mutually intelligible dialects of the same language. This language is believed to be distantly related to the Coos Bay and Alsea languages - all four languages together have been described as the ‘Coastal Oregon Penutian’ languages. Many people were multilingual - intermarriage and frequent travel for trade was common.
Chinook Jargon is a contact language that started at the mouth of the Columbia river to the Dalles and became well known and used throughout the Pacific Northwest among all the Tribes. Before white settlement the Jargon was used more commonly in connection to the Willamette Valley and Columbia River trade in which our Tribes took part in and used when we travelled those ways for various reasons mainly for prized trade items such as canoes. The “aluudaq” name for the high prow canoe was derived from the Quinalt language. It left a linguistic mark in indigenous languages as they borrowed words from it like guushuu (pig) and muusmuus (cow). It also left a mark on the landscape as many place names in the Pacific Northwest have their origins in Chinook Jargon, such as Nesika campground up the Coos River, Skookumchuck River, Illahee and Cultus Beach.
Knowledge of our languages were recorded recently among CLUS and CIT communities. Today, many elders heard their elders speak some of the indigenous languages. From 2017-2019 we interviewed close to four dozen elders with a focus on remembered language, family stories, etc. Many of our elders recall words, phrases, sentences, and a lullaby in the Miluk, Siuslaw, Upper Coquille and Chinook Jargon languages and recalled concepts specific to our tribal culture. We’ve also visited archives to retrieve copies of documents and recordings spanning a century of documentation on Hanis, Miluk and Siuslaw-Quuiich. All the documentation creates a body of knowledge that will contribute to revitalize our languages, and possibly coin new words for new technologies as the need arises.
The work around our indigenous languages, whether that be hearing our elders recall language, being exposed to language as a child, interpreting historical notes, and creating movement around language, transcends time from the past to the present, and brings us here today. The intent of the Language Committee is to create space for tribal members to come together and share thoughts and ideas around language.
If you are interested in serving on the Language Committee, please submit a letter of interest to Jeannie McNeil by jmcneil@ctclusi.org or mail to Attn: Jeannie McNeil, Tribal Admin at 1245 Fulton Ave. Coos Bay, OR 97420.